For our League game, I chose a scenario from Journal 12 called “A Real Barn Burner” and it lived up to its name.  ROAR has 4 French victories to 3 German ones for this scenario. 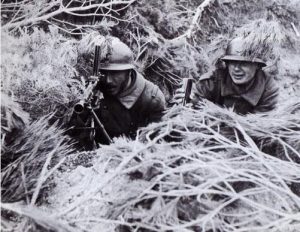 The scenario has a platoon (2.5 sqds) of Fanatic Elite Frenchmen holed up in one of those walled villages, with stone buildings on one side of the map, while on the other side of the map is a large group (10 sqds + MMG + LMG) of 1st line Frenchies with their backs to a river (the stream on this map is a unfordable river by SSR).  The German force of 9.5 1st line sqds, plus a 37L AT Gun which cannot set up Hidden and a light sprinkling of support weapons (MMG, 2x LMG, ATR) and 2 Foxholes is free to set up virtually anywhere on the map except the French startup area.

The French have to get >=1 Good Order MMC from their large force to one of the buildings in the small farm to achieve victory, and they only have 4.5 turns to do it. So, like a good German, I decided to simply prevent the large force from getting to the small force so that the French could not achieve their VC.

The action starts out hot and heavy because I set my Germans up right to the edge of the setup are of the large French group, and Ron set up right to the edge of his setup area as well.  The first bit of conflict occurred in a band of woods that runs most of the length of the board.  Ron broke some Germans, but they were able rout away and come back in a turn or so.  He pushed toward the edge of the wood, and into the teeth of my 37L Gun, which malf’ed on it’s second shot.

One of the first results of the game was a German squad taking a 1MC or something and rolling snakes and promptly going Berserk. The clever French Ambushed and killed him in CC, nullifying his Morale advantage.

Turn 2 had a German taking a PTC and rolling the French SAN.  Ron mentioned that PTCs don’t count for Sniper Checks, but this is wrong as per A14.1:

“…A player is subject to Sniper attack during any PFPh, MPh, DFPh or AFPh whenever he makes a TH, MC, TC, non-OBA IFT, or Entrenching, Original DR [EXC: those made for Prisoners] equal to the enemy SAN….”

Turn 3 went poorly for the Germans, as two squads in a stone building both broke to NMCs, and the 9-1 leader that was with the 467 + MMG broke as well. I didn’t make a single MC this turn, I don’t think.

Turn 4 had Ron perched at the edge of the wood, ready to make the charge across open ground with about 6 squads. With loud bellows of “Allons-y!” the Frenchmen rushed towards and around the German position.  Three were broken on -2 shots during the MPh, one was KIA’d during the DFPh, and one was Ambushed and killed (and the Germans created a 8-0 leader) in CC. A sole squad was left in the open, to try to make it to the safety of the farm building the following Mph.  In my Turn 4, I rallied the 37L gun, fired at the sole squad, missed, Intensive Fired, just hit, and did no damage.  It was my group of stouthearts with the MMG who put paid to the lone runner, and at that point Ron conceded the game.

A fun scenario, one that I would play again.