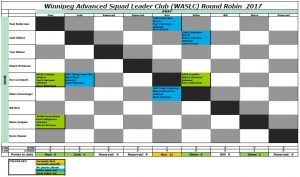 ♦ Change to the Ladder:  Two matches for each opponent is allowed.  For the first match, use the white boxes to determine who is the home/away opponent.  For the second match the statuses are reversed, so if you were the “home” team on the first match you are automatically the “away” team for the second match.
♦ The white boxes in your row indicate your “home” games, your column indicates your “away” games.
♦ You get to pick the scenario and rule set (full ASL, or ASLSK) in all your home games.
♦ For home games, you can reasonably expect your opponent to come to your home, or a reasonable venue of your choice (but please be accommodating).
♦ Wins get you 3 points, losses get you 2 points.  (Games not played get you, and your opponent, 0 points.  Appeals will be tolerated.)
♦ The 4 players with the most points will play off for the trophy (it’s a fine trophy with a long history).
♦ The cut off date for submitting ladder game results is December 31st at the stroke of midnight. Any submissions after that date will go instead to the 2018 Ladder results.

♦ The Laddermeister will post a list of the finalists with their rankings on New Years day. NEW: In case of a tie between two players, the player with the most wins against the other is awarded the higher standing.  If the players are tied in wins, the standings between the two are determined randomly.
♦ Scenarios for the playoff rounds on the days of the Finals are supplied by the Laddermeister, using the CASLO approach to scenario and side selection.
♦ In the playoffs, it will be 1 vs. 4, and 2 vs. 3 (adjusted for availability) in the morning round, and then the winners will play off in the afternoon/evening round for the trophy.